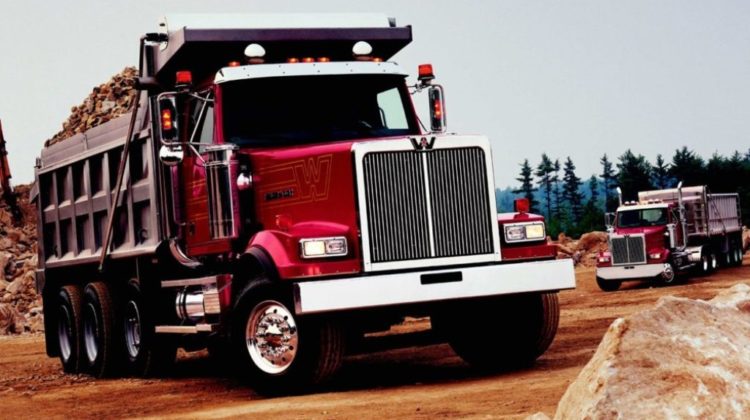 What Are The Different Types of Dump Trucks

Did You Know There’s 13 Styles of Dump Trucks?

A dump truck, also known as a dumper truck or tipper truck, is used for taking dumps such as sand, gravel, or demolition waste for construction. A typical dump truck is equipped with an open-box bed, which is hinged at the rear and equipped with hydraulic rams to lift the front, allowing the material in the bed to be deposited (“dumped”) on the ground behind the truck at the site of delivery.

The tailgate can be configured to swing up on top hinges (and sometimes also to fold down on lower hinges) or it can be configured in the “High Lift Tailgate” format wherein pneumatic rams lift the gate open and up above the dump body.

A semi end dump is a tractor-trailer combination wherein the trailer itself contains the hydraulic hoist. In the US a typical semi end dump has a 3-axle tractor pulling a 2-axle trailer with dual tires.

The key advantage of a semi end dump is a large payload. A key disadvantage is that they are very unstable when raised in the dumping position limiting their use in many applications where the dumping location is uneven or off level.

The second aggregate container on the trailer (“B” box) is powered by an electric motor, a pneumatic motor or a hydraulic line. It rolls on small wheels, riding on rails from the trailer’s frame into the empty main dump container (“A” box). This maximizes payload capacity without sacrificing the maneuverability of the standard dump truck. Transfer dump trucks are typically seen in the western United States due to the peculiar weight restrictions on highways there.

A truck and pup are very similar to a transfer dump. It consists of a standard dump truck pulling a dump trailer. The pup trailer, unlike the transfer, has its own hydraulic ram and is capable of self-unloading.

A super dump is a straight dump truck equipped with a trailing axle, a liftable, load-bearing axle rated as high as 13,000 pounds. Trailing 11 to 13 feet behind the rear tandem, the trailing axle stretches the outer “bridge” measurement, the distance between the first and last axles, to the maximum overall length allowed.

This increases the gross weight allowed under the federal bridge formula, which sets standards for truck size and weight. Depending on the vehicle length and axle configuration, Superdumps can be rated as high as 80,000 pounds. GVW and carry 26 short tons of payload.

When the truck is empty or ready to offload, the trailing axle toggles up off the road surface on two hydraulic arms to clear the rear of the vehicle.

A semi bottom dump or belly dump is a 3-axle tractor pulling a 2-axle trailer with a clamshell type dump gate in the belly of the trailer.

These trailers may be found either of the windrow type shown in the photo or maybe of the cross spread type, with the gate opening front to rear instead of left and right. The cross spread type gate will actually spread the cereal grains fairly and evenly from the width of the trailer.

By comparison, the windrow type gate leaves a pile in the middle. The cross spread type gate, on the other hand, tends to jam and may not work very well with coarse materials.

Double and triple bottom dumps consist of a 2-axle tractor pulling one single-axle semi-trailer and an additional full trailer (or two full trailers in the case of triples). These dump trucks allow the driver to lay material in windrows without leaving the cab or stopping the truck.

The main disadvantage is the difficulty in backing double and triple units.

A side dump truck also known as an SDT consists of a 3-axle tractor pulling a 2-axle semi-trailer. It has hydraulic rams that tilt the dump body onto its side, spilling the material to either the left or right side of the trailer. The key advantages of the side dump are that it allows rapid unloading and can carry more weight.

In addition, it is almost immune to upset or tipping over while dumping, unlike the semi end dumps which are very prone to tipping over. It is, however, highly likely that a side dump trailer will tip over if dumping is stopped prematurely.

Also, when dumping loose materials or cobble sized stone, the side dump can become stuck if the pile becomes wide enough to cover too much of the trailer’s wheels.

Trailers that dump at the appropriate angle, 50° for example, avoid the problem of the dumped load fouling the path of the trailer wheels by dumping their loads further to the side of the truck, in some cases leaving sufficient clearance to walk between the dumped load and the trailer.

Many winter service vehicles are based on dump trucks, to allow the placement of ballast to weigh the truck down or to hold sodium or calcium chloride salts for spreading on snow and ice-covered surfaces. Plowing is a severe service and needs heavy-duty trucks.

A Roll-off has a hoist and subframe, but nobody, it carries removable containers. The container is loaded on the ground, then pulled onto the back of the truck with a winch and cable. The truck goes to the dumpsite after it has been dumped the empty container is taken and placed to be loaded or stored.

The hoist is raised and the container slides down the subframe so the rear is on the ground. The container has rollers on the rear and can be moved forward or back until the front of it is lowered onto the ground.

The containers are usually open-topped boxes used for rubble and building debris, but rubbish compactor containers are also carried. A newer hook-lift system does the same job, but lifts/lower and dumps the container with a boom arrangement instead of a cable and hoist.

There are two primary forms: a rigid frame and an articulating frame. The term “dump” truck is not generally used by the mining industry, or by the manufacturers that build these machines. The more appropriate U.S. term for this strictly off-road vehicle is “haul truck”.

Haul trucks are used in large surface mines and quarries. They have a rigid frame and conventional steering with the drive at the rear wheel. As of late 2013, the largest ever production haul truck is the 450 metric ton BelAZ 75710, followed by the Liebherr T 282B, the Bucyrus MT6300AC, and the Caterpillar 797F, which each have payload capacities of up to 400 short tons.

Most large size haul trucks employ Diesel-electric powertrains, using the Diesel engine to drive an AC alternator or DC generator that sends electric power to electric motors at each rear wheel. The Caterpillar 797 is unique for its size, as it employs a Diesel engine to power a mechanical powertrain, typical of most road-going vehicles and intermediary size haul trucks.

An articulated dumper is an all-wheel-drive, off-road dump truck. It has a hinge between the cab and the dump box but is distinct from a semi-trailer truck in that the power unit is a permanent fixture, not a separable vehicle.

Steering is accomplished via hydraulic cylinders that pivot the entire tractor in relation to the trailer, rather than a rack and pinion steering on the front axle as in a conventional dump truck.

By this way of steering, the trailer’s wheels follow the same path as the front wheels. Together with all-wheel drive and low center of gravity, it is highly adaptable to rough terrain. Major manufacturers include Volvo CE, Terex, John Deere, and Caterpillar.